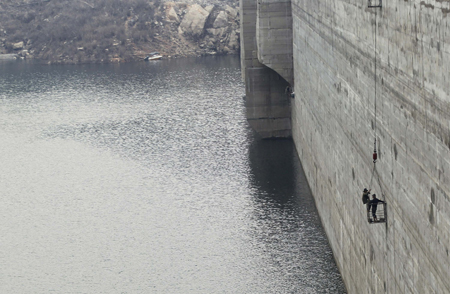 A few profit and many, including future generations, will pay the price for Vietnam’s short-sighted energy policy.

Workers try to fix a leak the dam at the Song Tranh 2 hydropower plant in Vietnam’s central Quang Nam province. With energy-hungry Vietnam depending on hydropower for about 40 percent of its electricity, dam developers have been disingenuous in preparing Environmental Impact Assessment reports irrespective of the facts, experts say. Photo: Reuters

The controversy over the flawed Environmental Impact Assessment (EIA) done for the Song Tranh Dam, now blamed for causing many tremors and quakes in the central province of Quang Nam since last November, has exposed major problems in the assessment and approval process of such projects.

It has trained the spotlight on EIAs of other controversial projects, including two hydropower dams near the Cat Tien National Park, a UNESCO-recognized world biosphere reserve in southern Vietnam.

Experts have said that the EIAs contain factual errors and have deliberately downplayed the ecological and environmental risks of the projects.

What is worse, it appears that such flawed EIAs are not the exception, but the rule.

Increasingly, in an energy-hungry nation that depends on hydropower for about 40 percent of its electricity, dam developers have been disingenuous in preparing EIA reports irrespective of the facts, experts say.

Erroneous reports have been duplicated with just the name of the location changed, for all practical purposes, suggesting they are not based on local research and analysis.

In some cases, the studies have been conducted after investment licenses were issued, which goes against standard practice anywhere in the world. Also, some developers have submitted reports with vague and weak sections on mitigation measures, but they have not been taken to task.

Experts say that by capitalizing on inadequate laws and lax implementation, developers of hydropower projects have managed to avoid public scrutiny, allowing dam projects to forge ahead without planners and decision-makers knowing or understanding their full implications.

He said public involvement in EIAs is generally limited and the reports are communicated only to local leaders and officials.

“Public consultations are not as common as they might be in other countries, and it is not always straightforward for agencies or local residents to get hold of the officially approved EIA reports,” Neefjes said.

An overwhelming majority of the hydropower firms, which only sell the power to state utility Electricity of Vietnam (EVN), have posted profits of up to over 200 percent in 2011, according to their financial reports.

“Hydropower projects in Vietnam are very profitable and it takes only a few years before getting returns on investment,” said Jeremy Carew-Reid, director of the Hanoi-based NGO International Center for Environmental Management.

Experts attribute the high profitability of the hydropower sector mostly to the cozy relationship companies enjoy with local governments that are mandated to issue project licenses in their localities. The firms manage to get favorable deals including the right to exploit water resources free of charge.

“Where there is weak supervision of planning, design, construction and operation of hydropower projects (weak EIAs), the investment costs may go down and profits go up,” UNDP’s Neefjes said.

And that is all that matters to the developers, “even though it might lead to negative environmental and social impacts on local and downstream people.”

Stuck in a rut

Vietnam is not the only country to aggressively pursue hydropower to meet its energy needs. Several developed countries in Scandinavia also depend greatly on hydropower.

But the major difference is that these countries build dams through a transparent planning process that spells out clearly and objectively the pros and cons of different energy sources, and allows the different stakeholders to voice their concerns.

“Hydropower development has indeed been important in Finland and other Scandinavian countries,” said Marko Keskinen, a water researcher at the Aalto University in Finland.

“As a result, there are currently no new big hydropower dams or reservoirs being built in Finland due to their negative environmental impacts.

“All in all, hydropower development is thus quite similar to any major development decision: it is a question of the context and scale, of sound and objective planning and impact assessment, and, ultimately, about political decisions.”

But energy-hungry Vietnam, caught in a dam rush started by developers looking to make big profits very quickly, has made things more difficult for itself with a lack of independent environmental impact assessments.

And it cannot get out of this path any time soon, experts say.

“Vietnam needs to improve energy efficiency per unit of GDP growth, and start to decouple its economic growth from growth in the consumption of polluting energy,” Neefjes said.

“But it may be too early to decouple growth from energy in general: Vietnam will need more electricity in the future than in the past for a growing population, industry and services.”

Government estimates have showed that Vietnam faces a power shortage at least until 2015.

According to the World Bank, at the end of 2005, Vietnam’s total installed generation capacity of 11,340 MW was dominated by hydropower (39 percent) and gas-fired plants (38 percent) with the rest supplied by coal-fired (14 percent), oil-fired (5 percent), and diesel generators (6 percent).

Vietnam aims to keep hydropower at 40 percent by 2015 while aggressively developing gas to a share of 40 percent and increase the proportion of coal-fired plants to 18 percent, the World Bank said.

But critics say the country’s continued hydropower development binge will have severe repercussions.

“The pace and scale of hydropower development in Vietnam is excessive with all rivers being dammed – in most cases many times, said Carew-Reid of ICEM.

Trinh Le Nguyen, executive director of the Hanoi-based Vietnamese nonprofit People and Nature Reconciliation, said many developers have strayed well beyond their core business like road construction or real estate to invest in the hydropower sector.

He cited the example of Doan Nguyen Duc, chairman of Hoang Anh Gia Lai Joint Stock Co and one of Vietnam’s best known property tycoons. Duc has been investing extensively in building hydropower plants in the northern mountains and even in Laos.

“Try imagining one day that all the rivers are dammed and hydropower development maxes out,” Nguyen said, implying that the consequences would be unimaginable.

“Yes, hydropower projects are so profitable because the wider community and future generations will pay the bill.”