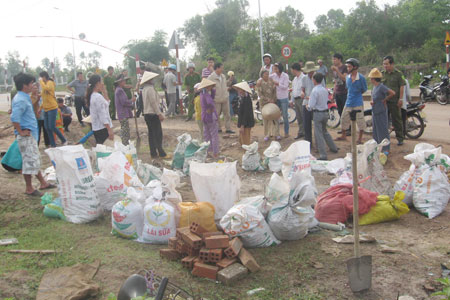 Locals in Tam An Commune gathered near the Ba Cheo Canal with sacks of soil and bricks and threatened to dam up the Long Thanh Industrial Zone’s drainage system last Friday. The Sonadezi Long Thanh Joint-stock Company has delayed paying them compensation for the pollution it caused.

Huat Van Sang’s feet still itch whenever he wades into the mud of the Ba Cheo Canal.

“I don’t think the pollution’s over,” said Sang, a farmer from Tam An Commune in the southern province of Dong Nai. “It’s not as serious as it was several years ago when stocks of fish and shrimp died off in the canal, but it’s still there.”

Between 2008 and 2011 the Sonadezi Long Thanh Joint-stock Company discharged untreated wastewater into the vital canal killing off all nearby aquaculture crops and poisoning surrounding duck farms, according to a report by environmental investigators. The Dong Nai government has asked the company, which is chaired by a National Assemblywoman, to compensate hundreds of Long Thanh farmers who lost their livelihoods. Since Sonadezi’s actions became public last August, 250 local households have signed a petition demanding that the company pay a total of nearly VND19 billion (US$913,000) in damages. So far, neither the local authorities nor the firm have been able to provide the victims with a timeframe for compensation.

The farmers are getting restless. Last Friday, at 7 a.m., a group of fifty men and women gathered outside the Long Thanh Industrial Zone—where Sonadezi manages waste for 42 companies. They carried sacks of soil and bricks. Their plan was to dam up the drainage pipelines that empty into the canal. By 9 a.m., a squad of local police and government officials had talked the disgruntled farmers into leaving.

But their plan provided yet another example of the desperation engendered by Vietnam’s environmental laws, which critics say prevent victims of industrial pollution from suing for compensation.

Furthermore, the inability of public interest groups to intervene on behalf of poor farmers has lead to widespread frustration—both among victims and advocates.

“That means an NGO like us cannot step in and support the victims, making it difficult for [the farmers] to prove they were directly affected by the company’s illegal dumping,” Nguyen told Vietweek.

“At the moment in Vietnam, neither of these avenues is available. Villagers are not able to join in a class action, nor can outside agencies help them to seek legal remedies for the harm they believe they have suffered,” he said. “Instead, people affected by pollution understandably feel they need to take direct action to get the attention of authorities.”

Waiting to be paid

According to a five-year report released last year by the Ministry of Natural Resources and Environment, water pollution was to blame for an estimated six million cases of illness from 2006 to 2010. The report estimated the costs of treatment at around VND400 billion ($19.5 million) and underlined the declining water quality in the country’s three major river basins.

Last August, police entered the Long Thanh Industrial Zone and found that Sonadezi had been discharging over 9,000 cubic meters of untreated wastewater per day into the canal that flows into the Dong Nai River. The case brought back the specter of Vedan Vietnam, a Taiwanese-invested MSG manufacturer that was caught in 2008 discharging untreated effluent through secret underground pipes into Thi Vai River (also in Dong Nai). Environmental investigators found that they had been doing so for at least 14 years.

The victims of both Sonadezi and Vedan appear to be in the same boat.

In 2008, four years before police raided the firm, Sang filed suit against Sonadezi seeking compensation for hundreds of ducks which he claims died from exposure to toxic waste dumped into the Ba Cheo Canal.

The farmer has yet to hear back from the authorities or the company.

“No one is there to support us with our lawsuit,” he said. “We’ve had to gather the evidence ourselves to prove we’ve been affected.”

Elsewhere, in Dong Nai’s Nhon Trach District, another farmer is still awaiting for his day in court.

“The authorities continue to dismiss my lawsuit as groundless,” said Nguyen Lam Son, the only farmer in Dong Nai Province who held out on suing Vedan for damages two years ago.

In July 2010, 10 months after Vedan’s activities became front page news, the authorities in Dong Nai convinced all but one of the affected farmers not to file a lawsuit against the company. Soon afterward, in the face of a massive public boycott, Vedan agreed to a compensation package.

Son insists he deserves three times the VND60 million that the local government paid him.

“It’s really hard for me to gather further evidence on my own,” Son said. “But… how can you find an organization to bail you out in this matter?”

Nguyen of PanNature said most environmental lawsuits in Vietnam end in arbitration.

“You have to deal with the authorities of local governments where the polluting companies are based. That’s a major loophole,” Nguyen said.

‘We did nothing wrong’

The state-owned Sonadezi company was established in 1990. According to the group’s website, it expanded to a group in 2005 and began investing in everything from clean water treatment, construction materials and infrastructure projects. The group says it has created over 200,000 jobs and accounts for 35 percent of Dong Nai Province’s economy.

Sonadezi’s chairwoman, Do Thi Thu Hang, was elected as a deputy of the National Assembly, Vietnam’s legislature, last July. She maintains that all of the group’s activities comply with Vietnamese law.

“We hold a license to discharge our wastewater,” Hang told Vietweek. “We did nothing shady or wrong.”

Asked when her group would compensate the affected farmers, Hang said: “We will do what the provincial government asks us to do.”

Sang, the Sonadezi-affected farmer, acknowledged that the group has created many jobs.

“But now… we’re sick of pollution here and we just want them to stop it,” he said.

Duong Trung Quoc, another legislator from Dong Nai Province, said the government’s top priority is to avoid creating conflicts with the people.

“As a lawmaker, you have to set an example,” Quoc said. “If the company has a technical problem, just make it public so all the parties involved can work out a solution.

“Don’t try to dodge your responsibility or create conflicts. The affected farmers always suffer the most.”

By An Dien, Thanh Nien News/VietWeek