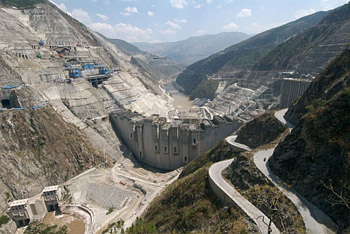 Wide-ranging coalition calls for the dam to be cancelled.

A crucial meeting takes place tomorrow in Siem Reap, Cambodia, among the ministers of the Mekong River Commission on whether to proceed with the US$3.5 billion Xayaburi Dam, the first of 11 large dams proposed for the Mekong River.

The dam is opposed by a wide range of NGOs, civil society groups and others who have serious concerns that the dam and its 10 mates will do irrevocable damage to the ecosystem and harm the livelihood of the 60 million people who live in the Mekong River Basin.

The Save the Mekong Coalition, an umbrella group comprised of 39 organizations as well as artists, fishermen, farmers and others, has collected petitions signed by nearly 50,000 people calling on the Thai and Laotian prime ministers to cancel their plans to build the dam. The electricity produced – as much as 1,220 Megawatts — is slated to be purchased by the Electricity Generating Authority of Thailand.

The Mekong River Commission is composed of officials from the governments of Laos, Cambodia, Thailand, Burma and Vietnam. Both Cambodia and Vietnam have raised concerns about the project, warning that environmental damage could ensue.

As the first Mekong mainstream dam to undergo the commission’s prior consultation process, the Xayaburi Dam is likely to set a precedent for how future decisions are made on the 10 other proposed mainstream dams, Save the Rivers noted.

According to the rules of the regional consultation process, the Laotian government must respond to requests for information and must wait for the governments to reach a consensus on whether the project goes forward.

It is questionable whether the protesters have the horsepower to get the dam cancelled. If it were, it would be the second major dam to be blocked in Southeast Asia. The first, totally unexpectedly, was the Myitsone Dam being planned for the upper reaches of the Irrawaddy River in Myanmar, which was the first concrete indication that the civilian government installed last November was listening to the wishes of its citizens. The cancellation resulted in consternation in China, which was building the structure and planned to take 80 percent of the electricity.

With Laos, however, it’s a different story. The government regards expansion of hydropower and sale across the region to surrounding energy-hungry economies as a tradeoff to increase the poverty-stricken country’s revenues and help to electrify and provide infrastructure for rural parts of the country, which currently are without power.

“Our message is simple,” said Chhith Sam Ath of the NGO Forum on Cambodia, in a prepared release. “Protecting the Mekong River is vital to ensuring healthy fisheries, abundant agriculture, and supporting the livelihoods and food security of millions of people in the region. As the first hydropower dam proposed for the Mekong River’s mainstream, the dam’s devastating impacts to river’s ecosystem, fisheries, and river-based livelihoods is likely to lead to serious cross-border conflict.”

The project is backed by a flock of major Thai banks and construction companies, particularly Ch. Karnchang, Thailand’s second-largest construction company, which has contracted to build it. Thailand, like most of the growing economies of Asia, is energy-short and sees the Xayaburi Dam as a partial solution to its problems.

The Vietnam National Mekong River Committee, however, is warning that the completed dam could cause a potential decline of 200,000 to 400,000 tons of fish per year as spawning grounds are cut off.

In an effort to influence the commission, the Save the Mekong coalition published three full-page advisements in the Bangkok Post, Phnom Penh Post and Cambodia Daily newspapers, calling on the Prime Ministers of Laos, Thailand, Cambodia and Vietnam to reject the proposal to build the dam.

“Numerous scientific reports over the past two years have revealed the risky nature of damming the Mekong River. In view of this mounting evidence, rather than gamble with our future, the Council should lead the region towards a new vision for the river and the region, and carefully reconsider plans to build the mainstream dams” said Trinh Le Nguyen of Vietnam’s People and Nature Reconciliation.

“The Mekong River’s rich resources and the ecosystem services it provides risk passing the point of collapse if the Xayaburi Dam and other mainstream dams are allowed to proceed. It is time for our governments to intervene and ask Laos to cancel plans to build the Xayaburi Dam and for Thailand to refuse to purchase its electricity, so that we still have fish left for the future,” said Ittipol Komesuk, Coordinator of Thailand’s Network of Thai People in eight Mekong Provinces.

“Over the last year, the Xayaburi Dam has divided governments and people,” said Srisuwan Kuankachorn of Towards Ecological Recovery and Regional Alliance. “We urge regional leaders to take a precautionary approach by issuing a resolution calling for the cancellation of the Xayaburi Dam. In the end, it’s not a technical decision, but a political decision that will reshape politics in this tiny but problematic region of the world.”