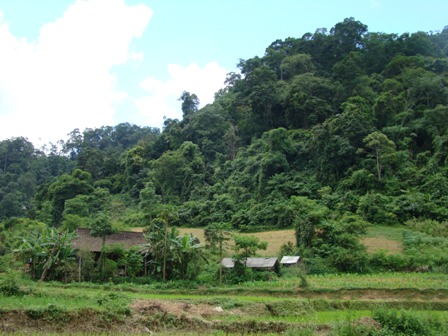 With the success of the pilot project on allocating land and forests to the community for management, experts believe that the “community forest” is really the good mechanism for sustainable forest management.

Bac Kan province proves to be one of the first localities applying the model on a trial basis, which has been allocating land and forests to local residents for management for the last few years.

What can a “community forests” mechanism bring?

In Bac Kan, the model has been applied in the communes of Ban Thi and Xuan Lac in Cho Don district, and four hamlets belonging to Van Minh, Lang San communes of Na Ri district.

In Ban Thi and Xuan Lac, where the model of community forest management developed by CARE has been implemented, and nine teams in charge of managing and protecting forests have been established. The members of the teams attended the training courses to improve their capability, and they were introduced how to build up the action plans and operation regulations (the regulations were recognized by the district authorities).

After three years of implementing the mechanism, in 2006-2009, under the project, nearly 1000 hectares of forests have been allocated to local residents, who will protect and cultivate for five years.

Meanwhile, in Van Minh and Lang San communes, under the project funded by AusAID for three years 2007-2010, four hamlets could build up the models of “nursery gardens” at hamlet and village levels. The most outstanding outcome of the project is that the illegal exploitation has been eased significantly. The satisfactory result has been explained by the reasonable management mechanism, under which, the effectiveness in forest management is always associated with the benefits of managers and protectors.

Especially, the Na Ri district’s authorities have granted local residents the certificates on the land use right on the forest area put under their management. A forest fund management with the initial capital of 13 million dong has also been set up in the communes, which have been used to pay for the forest patrolling, equipment purchases and to lend to local residents at preferential interest rates.

However, some problems still exist in the implementation of the community forest models in Bac Kan. “Community” does not have the full legal status to enjoy the benefits in forest and land management, to access preferential credit and make commercial exploitation in the forests.

The legal framework still lacks the provisions on the benefits local residents – the managers and protectors of the forests, can enjoy, especially the commercial timber exploitation.

Good signals from PES and REDD

At the recent meeting between the delegation of the Ministry of Agriculture and Rural Development and the leaders of Na Ri and Ba Be in Bac Kan province, Deputy Minister Hua Duc Nhi said that the ministry has submitted the plan on the second phase of REDD project to the donors, and Bac Kan would continue to be one of the two provinces to implement the second phase.

NOTE: This is the translation by VietnamNet Bridge of the original article published in Vietnamese on PanNature’s news website ThienNhien.Net (click here for the Vietnamese article).