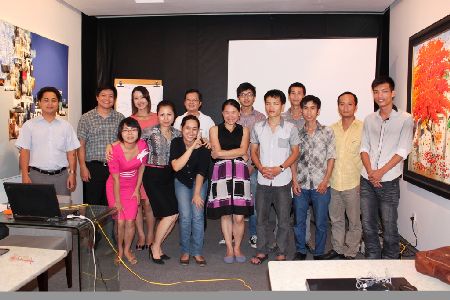 From 22 – 29 July 2011, Hoang Van Chien, reporter at PanNature’s ThienNhien.Net news website was offered to attend the training course “How to Tell Your Story in the Age of YouTube” organized by the Public Affairs Section of the U.S. Embassy in Hanoi and the video production company Red Bridge.

The workshop aimed to improve capacity and skills of participants in using digital video cameras and visual language to produce short clips. After the course, participants will be able to use learned skills to report on an issue and/or promote their organization.

Participants of the training course.

There were 12 participants in this training course, including 6 journalists from national media agencies and 6 Vietnamese NGO staff.

By end of the course, participants also filmed and produced short video films and published on the Internet through YouTube channel.