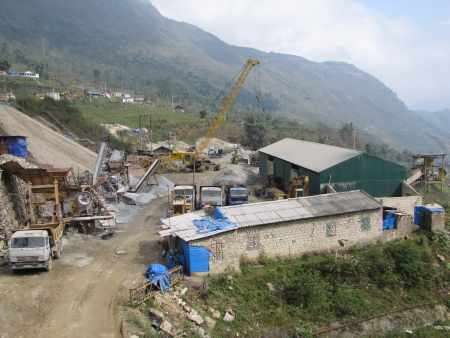 People are trying to build more and more hydropower plants to satisfy their thirst for power. However, when power plants are set up, the environment gets degrading and the tourism industry cannot develop.

According to PanNature, an arm of the Vietnam Union of Science and Technology Associations (VUSTA), to date, Lao Cai province alone has had 110 hydropower plant projects, both big and small, Quang Nam 61, Kon Tum 68, Gia Lai 78 and Lam Dong 71.

According to the Ministry of Industry and Trade MOIT, in 1994-2010, 23 medium and big scaled hydropower plant projects were put into operation with the total designed capacity of 6200MW. Currently, the river system in Vietnam is “bearing” 500 hydropower plants, big and small. It is expected that 1021 hydropower works would be built.

According to Ngat, a lot of foreign tourists, who love trekking and want to discover the nature, do not want to go to Ban Ho any more. It is now so dusty here because mountains have been destroyed for the power plants, and plants have been chopped down, while rivers and streams have become depleted. No one wants to stay in such circumstances.

As a result, the houses on stilt designed for overnight tourists have become idle. “I do not know what benefits the hydropower plants will bring to us. But I am sure that we have lost the sources of income due to the power plants,” Ngat said.

“Hydropower plants have been rising in masses and in a spontaneous way. Is it too late to think of developing hydropower plants in a sustainable way in Vietnam?” he said.

In fact, experts have been for a long time arguing about the pros and cons of the hydropower plants. And while the debate has not come to and end, the story about the power plants Dong Nai 6 and Dong Nai 6A which is expected to “rise up” in the Cat Tien National Park, has, once again, stirred up the public.

However, Cat Tien is not the only national park which bears big consequences from hydropower plants. The thick density of hydropower plants on the rivers, which has caused a hard pressure on the ecological diversification protection, can also be seen in a series of national parks and sanctuaries, including the Song Thanh Sanctuary in Quang Nam and Pu Hoat Sanctuary in Nghe An provinces, where forests were destroyed to give place for the power plants.

A research work on water reservoirs in the north of the central region, completed at the end of 2010 by the Vietnam Association for Protection of Nature and Environment, has pointed out that the Truong Son Mountain has been incurring bad consequences due to the massive rise of hydropower plants.

The survey has pointed out that the unreasonable construction and management of the hydropower plants in the central region and Central Highlands in the last 3-5 years have made the situation more serious. The consequences of the historical floods in 2007, 2009 and 2010 were more serious because of the hydropower plants and irrigation works. Experts have pointed out that the natural calamities and “artificial calamities” both have destroyed the ecosystem.

Hydropower and energyRiver basin and watershed