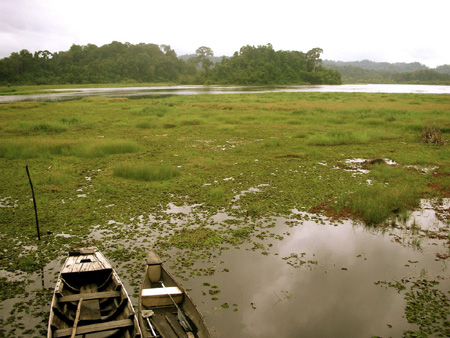 With hydropower running amok in this country, local critics of neighboring dam projects are throwing stones in a glass house.

A view of the Cat Tien National Park, where two planned hydropower projects, if built, would encroach on around 140 hectares of forest. Conservationists fear that the two planned dams would totally transform the aquatic environments in the park, which straddles Dong Nai, Binh Phuoc and Lam Dong provinces.

A group of scientists who recently visited the site of two upcoming hydropower projects near Cat Tien National Park said they suspected that the projects’ developer was being disingenuous in a recent environmental assessment report which concluded that the impact would be minimal.

The report contained factual errors and downplayed the ecological and environmental risks of the two projects, scientists at the Vietnam Academy of Science and Technology’s Institute of Tropical Biology said after their one-week trip.

The fact that the project investor, Duc Long Gia Lai Group, funded the environmental impact assessment (EIA) report is considered normal by experts in the field. But the scientists are concerned that the developer has failed to be transparent in its report and has so far gotten away without any meaningful public scrutiny.

“It is a normal… procedure for the developer or project proponent to prepare the EIA… But this approach requires a rigorous public and expert review process prior to finalizing the document to ensure that it is objective and of the highest standard,” said Jeremy Carew-Reid, director the environmental NGO International Center for Environmental Management (ICEM).

“In Vietnam, that opportunity for public input and independent expert review is very limited.”

“There’s the chance for them to control the EIA process in a way favorable for their own benefits,” Nguyen said.

But the Southern Institute for Water Resources Planning claimed it had been assigned by the Ministry of Agriculture and Rural Development to conduct the EIAs of the Dong Nai 6 and Dong Nai 6A dams that, if built, would encroach on around 140 hectares of forest in the Cat Tien National Park.

Either way, the law requires more than just an EIA to be carried out for such a project.

“Most important in this case, if there is more than one dam proposed for the same river, the accumulated impacts of all of the projects should be analyzed together in a Strategic Environmental Assessment before an EIA for each particular project is done,” Carew-Reid said. “This is a requirement under the Vietnam Environmental Protection Law.”

Located just 160 kilometers northeast of Ho Chi Minh City, Cat Tien is home to around 1,700 precious plants, including those in the large genus of Dalbergia, and more than 700 species of animals and birds, several of which are endangered. Eleven ethnic minority groups live around the park.

After the discovery of a population of Vietnamese Javan Rhinoceros in 1992, the park was declared a Rhinoceros Reserve and received worldwide attention. The park has also been officially titled a world biosphere reserve by UNESCO.

Conservationists fear that the two planned dams would totally transform the aquatic environments in the 72,000-hectare park, which straddles Dong Nai, Binh Phuoc and Lam Dong provinces. They also expressed concerns about the livelihood of residents who live in the planned sites of the projects in Lam Dong, Dak Nong and Binh Phuoc provinces.

But in a report sent to the Prime Minister, the Agriculture Ministry said it believed that the two dam projects are “in line with the nation’s power development blueprint and vital to boosting economic growth.”

Vietnam depends on hydropower for about 37 percent of its electricity, followed by gas at 36 percent and coal at 16 percent, according to statistics from the Association of the Electricity Supply Industry of East Asia and the Western Pacific.

Conservationists have, however, cringed at the country’s continued hydropower development binge.

“For many rivers in Vietnam, hydropower is no longer a ‘clean’ and sustainable energy solution when there are too many projects built or planned in a river basin,” PanNature’s Nguyen said. “Hydropower is becoming a factor that distorts the ecosystems, natural flows, and human livelihoods.”

ICEM’s Carew-Reid acknowledged it was understandable that energy developers would promote their products and services and try and maximize development and profits in their sector.

“It is up to the government to ensure that the sector develops in a balanced way and not at the cost of other national interests,” he said. “In Vietnam, that is not happening.”

Where does the buck stop?

The Ministry of Natural Resources and Environment has shrugged off the EIA report done by the developer, saying the fate of two projects would have to be determined by the National Assembly – Vietnam’s legislature – a move that has been welcomed by the environmentalist community.

A National Assembly resolution stated that any projects encroaching on 50 hectares that belong to nature reserves and protected forests must be submitted to the national legislature for debate and approval.

Duong Trung Quoc, a prominent lawmaker, said he would grill the government on these projects at the first session of the newly-installed National Assembly, which commenced Thursday (July 21) in Hanoi.

“But as far as I understand, the house has not set aside any time for debate on this issue at this session,” Quoc said.

Quoc said he hoped lawmakers would have a chance to debate the projects soon, saying he was also “troubled” by plans to forge ahead with the project.

“If we don’t respect and protect the ecosystem and environment of our own nation, we cannot expect other countries to do so to ours,” Quoc said.

By An Dien, Thanh Nien News