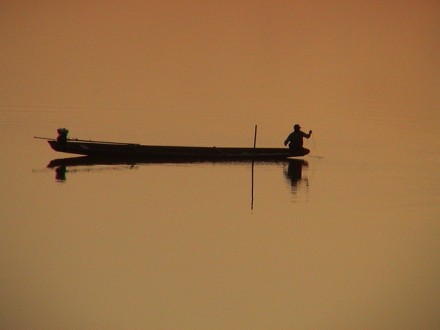 Chinese dams threaten one of the world’s most biodiverse rivers, critics say. It’s not just environmentalists who are worried.

The untamed, roaring currents of the mighty Mekong have long enchanted travellers, inspired explorers and sustained some 65 million inhabitants who live off the world’s largest freshwater fisheries.

From its source in the snow-capped mountains of Tibet, the Mekong flows 1,880 kilometres through China, winding down through the heart of South-east Asia before emptying into a fertile delta in Vietnam.

‘For the people born on the Mekong, the river is like their blood—the principle of life,’ says Dorn Bouttasing, an environmental researcher in Laos.

Nita Roykaew, a teacher and ecologist based in Chiang Khong in northern Thailand, agrees. ‘The Mekong is very special for the people,’ he says. ‘The community understands what’s important for life: water, forests, soil and culture.’

Nita, a community organiser with the ‘Save the Mekong’ campaign, says he sees the river as a precious part of the country’s cultural heritage, something that should transcend simple financial considerations. ‘Many governments only think about the economy,’ he says. ‘(They think) nothing about nature and culture.’

But the river, one of the most biodiverse in the world, is under threat. Included in the river’s rich ecosystem is the giant catfish, which can grow to up to 3 metres in length and weigh in excess of 300 kg, as well as a colony of the endangered Irrawaddy dolphin. It’s a natural mecca for ecotourism, but rapid investment in the rapid expansion of hydropower dams is starting to take its toll.

China has already built four dams on the Lancang (the Chinese stretch of the Mekong), including the colossal Xiaowan Dam, the tallest high-arch dam in the world at  292 metres high, which was completed in August.

But plans for four more in China on top of 11 already approved by government planners in Laos and Cambodia have raised serious concerns about the river’s future.

‘The two dams, Xiaowan and Nuozhadu (the next Chinese dam to be built), will impact the flow regime of the entire system—all the way down to the delta in Vietnam,’ saysPhilip Hirsch, director of the Mekong Research Centre at the University of Sydney.

But it’s not just the Chinese government that supports the dam building. Officials in Laos are also keen to exploit the promise of hydropower, seeing it as one way to lift the country out of chronic poverty through electricity sales to energy-hungry neighbours Thailand and Vietnam.

Indeed, Laos has just become the first of the Lower Mekong nations to push ahead with a dam project on the river—at Xayaburi—aimed at generating electricity to sell to Thailand.

Last month, in accordance with a Mekong River Commission agreement between the four Mekong countries, the Laotian government formally notified the Commission of its intentions, setting in motion a six-month consultation process with Cambodia, Thailand and Vietnam that allows the others to voice any objections.

The problem for countries further down the Mekong is that dams reduce the levels of sediment and silt that carry nutrients essential for fish to survive. Taming the river’s waters will, Hirsch predicts, reduce the river to little more than ‘a series of still reservoirs and stagnant pools.’

‘This cascade of dams will transform the Mekong’ he says.

But there’s also concern closer to home. While foreign investors and Lao officials insist that their plans will help develop this poor, landlocked nation, many villagers remain sceptical. Scientists, NGOs and Mekong communities, meanwhile have all expressed concern about rushing into a dam building spree before the likely environmental impact is fully understood.

‘There’s a very fast pace of hydropower development,’ says Juha Sarkkala, a Mekong specialist with the Helsinki Institute of the Environment. ‘We need a timeout. We need a moratorium on dams to consider a different strategy of development.’

The Thai NGO forum, representing 24,000 people living in river communities inNorthern Thailand, has called on the government to cancel commitments by the Thai Electricity Company to purchase electricity from the Xayaburi dam.

A Thai parliamentary committee chaired by Kraisak Choonhavan MP is studying the impact of dams on the Mekong, but Kraisak has already indicated he has significant concerns. ‘The effect of the Xayaburi Dam will be devastating on all the countries—Laos, Thailand Cambodia and Vietnam,’ says Kraisak, a former senator and now deputy leader of the ruling Democrat Party.

The World Wildlife Fund has also waded into the issue, stating that if the Xayaburi dam is built, it will almost certainly wipe out the endangered giant catfish, adding that the colony of Irrawaddy dolphins would also stand little chance of survival.

The controversy means that Xayaburi has become a test case for Mekong dam projects as an international issue. If Thailand and Vietnam both express serious objections, then the dam is likely preventable—Laos will only go ahead if it’s sure Thailand will buy the electricity produced.

Many NGOs and scientists in Vietnam, meanwhile, have already spoken out against the building of more dams. Trinh Le Nguyen, executive director of the NGO People and Nature Reconciliation, argues: ‘For Vietnam, the existing and proposed dams on the mainstream and tributaries of the Mekong River pose tremendous threats to 20 million people living in the delta.’

Cambodia for its part might also raise objections, as the dam risks disrupting a significant food source for the country.

Many of the planned downstream dams will block fish migration, especially the Don Sahong near the spectacular Khone Waterfall, which sits astride the only passable channel for fish swimming up from Cambodia and Vietnam. For Cambodians who depend on freshwater fisheries for an estimated 80 percent of their protein intake, dams that block fish migration spell disaster for food security.

Gordon Congdon, WWF’s representative in Kratie, Cambodia, argues that to replace the main protein diet of fish for the about 65 million people that would be affected could involve ‘fantastic’ costs if governments were forced to import additional meat to compensate for the loss of fish.

So Nam, a professor at the Institute of Fisheries in Phnom Penh, agrees.

‘People there totally depend on fish—we have one of the highest rates of fish consumption in world,’ So says. ‘Every year, Cambodian people catch about half a million tons of fish, and it provides more than six million people with employment.’

The final Strategic Environmental Assessment report by independent consultants to the MRC has also made clear the enormity of the risks involved in going ahead with more dams. SEA consultants have investigated four possible options for MRC member states, but have recommended that decisions on mainstream dams should be deferred for a period of up to 10 years, with a review every three years.

Hirsch insists that on an issue as important as this, that this should be the absolute minimum. ‘It should only be decided on the best possible evidence. Let’s hold off for at least ten years. Atleast ten years,’ he says.

It’s clear that the decision on Xayaburi is about more than just one dam—it could set the course of the Mekong’s fate for generations to come.

If the Xayaburi proposal is approved and implemented,Nguyensays he worries that it will effectively give the green light for more such projects. ‘That’s a dangerous movement,’ he says. ‘At the end of the day, no dam is the best option for all countries—not only for Vietnam’.