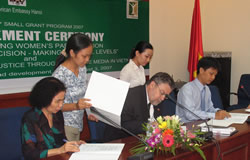 The US embassy in Hanoi has provided almost $40,000 to two local organizations for projects to support womenâ€™s rights and environmental journalists.

Ambassador Michael W. Marine presented the grants to the Center for Promotion of Education and Empowerment of Women (CEPEW) and People and Nature Reconciliation (PanNature) at a ceremony in Hanoi Friday.

The CEPEW, together with the Women’s Union in the northern Ha Nam Province, has been selected to implement a $19,962 program to strengthen the role of women in politics and decision-making in the provinceâ€™s Duy Tien disÂ­trict.

A grant of $19,965 to PanNature, a non-profit organization, is meant for a project to proÂ­mote equal access to the country’s natural resources, particularly by disadvantaged communities, through an independent online media.

Both projects will run until June 2008.

Source: The US Embassy in Hanoi